We’re pleased to announce that Larry L. will begin applying his considerable storytelling talents to the news pages this fall as he picks up where Kits M. is about to leave off.

We’ve asked Larry to write about interesting local characters, to introduce us to people behind the news of the day, to inspire us, and to shine a light on areas of our community that don’t otherwise get covered We trust he’ll find his own approach to a beat like that.

Larry will cover the M’s through the end of their season and then begin the transition to news. That also gives us time to figure out the new sports coverage plan, .
Please join us in congratulating Larry on this new assignment. 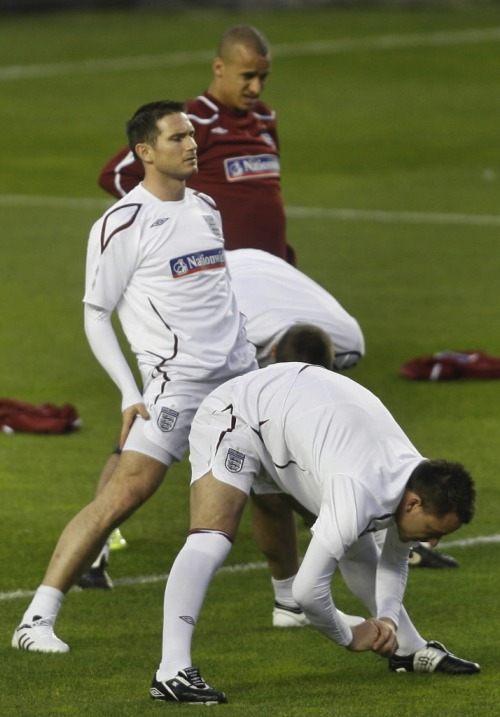 England stars Frank Lampard, left, and John Terry get in a little "training" prior to the Brits' international friendly against European champion Spain in Seville.

All of which brings to mind the gloriously inappropriate words of Archie Bunker, the malaprop king of Queens. It’s rude, it’s hurtful, and it’s hilarious:

Posted in football with feet

Joe Paterno: I will bury every last one of you worthless fuckers!

The meaning of Tiger Woods’ caddy flap: You can prick a finger, but you can’t finger a prick

Steve Williams, the caddie for Tiger Woods, right, watches with disgust as world-famous prick Phil Mickelson takes a drop during the 2008 U.S. Open at Torrey Pines. Mickelson's management company said the notion that he's a big prick is "grossly inadequate."

Fealty to our Puritanical heritage continues to mangle our language and bungle our attempts to communicate effectively.

As you’ve probably discovered, the self-abusing media got all hot and bothered because Tiger Woods’ caddy, Steve Williams, had the audacity to call fellow golfer Phil Mickelson a prick at a charity event in New Zealand over the weekend.

Reached via satellite phone at his lakefront Xanadu in southwestern Florida, Woods allowed as to how disappointed he was to hear Steve Williams speak in such ungentlemanly terms regarding his rival (though he privately regards Mickelson as one swollen, grotesque prick).

This is all good stuff, good for golf and good for the prurient interest. The problem? You will not find the word “prick” anywhere in the pages of the mainstream American media. Too salty for our gentile tastes, it seems.

This is how Larry Dorman, writing in the New York Times, described the story:

“Williams shed his well-documented aversion to speaking on the record to reporters last week. At an event in New Zealand he was quoted in the British newspaper The Guardian saying, “I wouldn’t call Mickelson a great player,” and using an expletive to describe him.

The quote has been bowdlerized and eviscerated. In the Guardian Web site, right under the headline “Woods’s caddy delivers withering assessment of World No. 2 Mickelson,” is the quote: “I wouldn’t call Mickelson great ’cause I hate the prick.”

Curiously, The Times attempts to deflect its priggishness by running a photo of “Caddyshack” characters Ty Webb and Danny Noonan under the dubiously punny headline, “Woods left holding the bag after caddy’s remarks.”

The Associated Press, with golf writer Doug Ferguson at the helm, also avoided the profane, twisting the quote to Williams saying he wouldn’t call Mickelson a great player “because I think he’s a (expletive).”

In addition to omitting the offensive word, both citations remove the central emotion. Williams, at least in The Guardian’s story, didn’t say “I think he’s a expletive.” He said, “I hate the prick.”

The most distressing problem with this self-righteous obeisance to the prim and proper is it clouds the story. “I think he’s a (expletive)” just sends you to the Internet to find out just what sort of expletive Steve Williams think appropriately describes Phil Mickelson.

Is he a fuck? An asshole? A douchebag? A cocksucker? A motherfucker? A shithead?

It makes no sense.

The story, in essence, is that Tiger Woods’ caddy called his primary rival a prick. If that is newsworthy, and every major media outlet in the world seems to think it is, then there’s no story without the prick. No matter what the Associated Press Style Book or the Chicago Manual of Style has to say.

In a humorous sidebar, Mickelson’s management company issued a statement in response, saying Williams’ description of their golfer as a prick is “grossly inaccurate and irresponsible.”

All of this is old news and summons to mind the immortal bit by the late George Carlin, which includes the line “you can finger your prick, but you can’t prick your finger.”

Posted in america in crisis 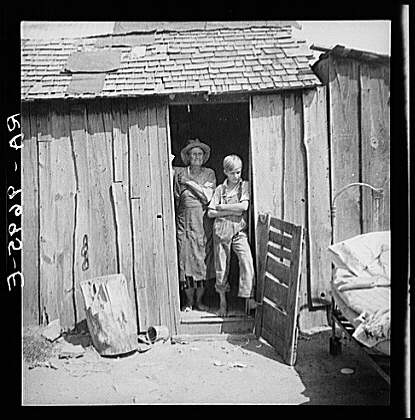 Ich bin ein Okie! Oklahoma is threatening to leave Mississippi and Arkansas far behind in the shame game, falling out of the national top 10 in infant mortality rate and ranking a salutary sixth in percentage of population living below the poverty line.

In what might be the best news for Oklahoma since the Broadway musical of the same name (!), Zogby has released a survey that suggests fewer Americans view Oklahoma as a cultural wasteland littered with billionaire cowboys and Indian reservations.

The Oklahoman newspaper wasted little time in trumpeting the news, running a story in its sports section under the headline “Oklahoma gets good reviews from nation, poll shows.”

With no apparent sense of irony, reporter Michael McNutt opens the story with this dazzling sentence: “Walmart shoppers and NASCAR enthusiasts are among Oklahoma’s biggest fans, a recent survey of Americans shows.”

By the way, this wouldn’t be the same Zogby that released an exit poll forecasting John Kerry would win the 2004 presidential election with 311 electoral votes?

Not the same Zogby that released a poll on Halloween of this year, just days before the election, showing John McCain was within 1 percentage point of Barack Obama?

Well, yes, it is. But that shouldn’t sway anyone into thinking that Oklahoma isn’t the best darn state this side of Arkansas.

If Oklahomans are busting their buttons because only one in eight Americans think Oklahoma is a hopeless backwater, well, far be it from me to spoil their fun.

In any case, Richard Rush, president and CEO of the state chamber of commerce, is not about to have his fun spoiled.

“Oklahomans have known for a long time that the state is a great place to raise a family, grow a business and live your dreams,” Rush said. “It is fantastic that the rest of the country is starting to figure out our little secret.”

Yes, the secret is out. Oklahoma, which went for John McCain with greater enthusiasm than any state in November, is at the vanguard of the national zeitgeist. Americans from points north, south, east and west will be rushing to the promised land of Oklahoma now, in search of the good life. Sort of a reverse Dust Bowl exodus.

Those Nouveau Okies might be interested in in a few other random statistics not provided by John Zogby and his messengers of sunshine.

As sports observers, we know that Oklahoma ranks No. 2 in college football, No. 5 in both men’s and women’s college basketball and dead last in the NBA standings.

According to the U.S. Census Bureau’s 2008 state rankings, Oklahoma ranks:

But hell, things are on rise. The NBA has arrived in Oklahoma City, and the fact that the Thunder is on pace to be one of the worst basketball teams in NBA history shouldn’t detract from the boom-time euphoria.

We are all Oklahomans now!

Posted in america in crisis

Terrell Owens: "I'm a sensitive human being. I still cry when Rudolph gets banished to the Island of Misfit Toys, and I simply adore 'Die Fledermaus.' I don't know why Jason would do me this way."

ESPN’s Chris Mortensen, citing team sources, confirmed that Witten and Owens exchanged words after practice Friday at the Cowboys training facility. One team employee, who requested anonymity because both Owens and Witten are capable of crushing him like a cockroach, said Owens was visibly upset after the altercation.

“I thought Terrell was going to weep when Witten looked at the floor with disgust, bit his lip and said, ‘I never liked Johan Strauss the Second and I have no interest in this weightless Viennese schmaltz you call art. I’m a man. Give me Sturm. Give me Drang. Give me Wagner. Leave me out of this. You can go by yourself.'”

The incident came in the wake of media reports that Owens believes Romo and Witten meet privately, go out for milkshakes, play pinochle and draw up plays without including Owens.

Owens later issued a statement on his Web site, terrellowens.com, saying, “I love and respect Jason as a teammate and a friend. I think Jason understands this. I’m a sensitive man. I still cry when Rudolph gets banished to the Island of Misfit Toys, and I simply adore ‘Die Fledermaus.’ And this is the last performance of the season.

“I don’t know why Jason would do me this way.” 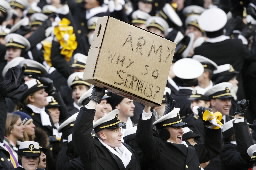 Army's abysmal performance over the past seven Navy games has provided fun-loving Midshipmen plenty to guffaw about.

PHILADELPHIA – After succumbing meekly to another Navy blitzkrieg and suffering its seventh consecutive defeat to the hated Middies on Saturday afternoon, Army has announced that it has agreed to a 12-month timetable for withdrawing from the venerable service academy rivalry.

Army, which has lost the last seven outings by an average of 29 points and looked as hopeless as ever in Philadelphia on Saturday, says it will pull out of the series after the 110th and final edition is played Dec. 12, 2009, at Lincoln Financial Field in Philadelphia.

A blue-ribbon panel of current and former Army generals commissioned by the U.S. Military Academy, including Norman Schwarzkopf, Colin Powell and David Petraeus, concluded that the only dignified exit for the beleaguered Army team is to cease operations in the rivalry that dates to 1890.

“I know I’ve been an outspoken critic of premature withdrawal in the past,” Petraeus said late Saturday. “But when we assessed the situation and the mounting losses we’ve incurred, we came to one inescapable conclusion. Pouring more manpower and money into an ever-growing black hole is just … counterproductive. We’ve been caught in are a lot of storm clouds out there, and we don’t want to get hit by a lightning bolt.”

Thus will end the nation’s most treasured college football rivalry, which began with a 24-0 Cadets victory in West Point way back back in the 19th century. The series has produced enduring legends like Army’s Doc Blanchard and Glenn Davis, aka Mr. Inside and Mr. Outside, and Navy’s Roger Staubach.

Navy’s seven-game win streak marks the most lopsided period in the storied rivalry. The margin of victory has been in double-digits every time, with the closest being Army’s 26-14 loss in 2006. Army fashioned an 8-0-2 run between 1922 and 1933, but those games were much more competitive, with the Black Knights’ average margin of victory being 8.8 points.

The 74-year-old Schwarzkopf said he was “heartbroken” to see the demise of the Army-Navy Game, but that there was little else that could be done.

“Did you see the way they kicked our tails all over the field today?” said Schwarzkopf, who led U.S. forces in the first Gulf War. “It was (bleeping) pathetic. Running the ball up the middle when we’re down three touchdowns in the fourth(-bleeping) quarter? It’s (bleeper-bleeping) heartbreaking. Seeing those (bleeper-bleeping) Bluejackets own our asses, makes an old soldier want to break down and cry.”

With Navy’s 34-0 whitewashing Saturday, the first shutout in the game since 1978, the Midshipmen lead the series 53 wins to 49. There have been seven ties.